Photos and story by Renee Bodine

GAINESVILLE, Fla., Jan. 29, 2018 – At dawn a line of homeless start gathering around the Old Globe Theatre building on West Ashely Street in downtown Jacksonville, Fla., waiting for a meal at the Clara White Mission. Just like they have done every day since Dr. Eartha M. M. White established the mission at the turn of the 20th century and named it after her mother, Clara, who had invited the hungry to her dinner table.

Now Ju’Coby Pitman, CEO and president, carries on Eartha’s tradition, expanding the mission into to a community development center with job training and housing for the homeless and veterans while feeding more than 500 people every day.

And she has started an urban farm that connects it all.

NOURISHING A COMMUNITY
Five miles northwest of the mission, tucked away off a busy street lined with strip malls and convenience stores, White Harvest Farms is cultivating peas, greens, squash, tomatoes, onions, melons and hope on 14 acres near Moncrief Creek.

Ju’Coby’s grandparents lived in the area and saw first-hand the decline over the years. The neighborhood is designated a food desert because of the lack of fresh produce and healthy food options.  “We need to address the social issues,” she says. She met with the community residents and leaders to ask if they would support a farm. They embraced the idea and planting began in 2012 on the land Eartha had acquired decades ago. Ju’Coby renovated a small house down the street on the property and opened a farmer’s market.

“This land touches a lot of people,” she says. And it does:

She didn’t know anything about farming, so she went to the USDA Baldwin Service Center. Soil conservationist Paula Allen helped her sign up the property as a farm with the Farm Service Agency and described the programs available through USDA’s Natural Resources Conservation Service.

Last year NRCS technical and financial assistance helped build a high tunnel to extend the growing season through the Environmental Quality Incentives Program (EQIP). The White Harvest Farm qualified for increased payment rates as a socially disadvantaged, beginning and limited resource operation. The 30’ by 70’ structure is covered in six millimeter white plastic that rolls up on the sides. It keeps crops cool in the heat of the summer and protects them from cold temperatures in the winter. Through multiple visits to the farm Paula’s respect and admiration grew for Ju’Coby as she learned about the Clara White Mission legacy.  “She really listens to people, even the smallest things. She is the heart and the soul of the community and does what the voiceless can’t,” Paula says.

William has been farming all his life, and has been working at White Harvest for the last two years. In the afternoon two or three high school neighborhood kids can be seen following the 73-year-old while he goes about his work.  William believes teaching youth about agriculture is one of the benefits the farm offers the community besides fresh produce. “These kids have never experienced anything like this, they don’t know where their food comes,” he says.

Val joined William last August. She became certified in Permaculture design in Hawaii, studied tropical food forest systems on a small island off the coast of Panama and worked on an organic farm in Oregon. She started a permaculture meetup group that now has 3,000 members and recently earned certification in Korean Natural Farming techniques.

When Val came to the farm, the land had been continually tilled, chemically farmed and the topsoil was washing downhill with every rainfall. Her first task is to build soil health. “We began to build the biology that structures the soil by bringing in compost, using cover crops, mulch and pro-biotic “fertilizers.” All very different methodologies from what William grew up with.

“I am the rabbit,” says William, pointing at Val to his left, and adds, “She is the turtle.”  Old-school and new, they complement the farm. William is learning not to plough as they transition the farm to no-till and use cover crops. “I am learning Mr. Byrd’s timing with crops,” Val says. Right now tomatoes and peppers fill the high tunnel. Plants lining the sides of the tunnel provide integrated pest management. Yarrow harbors beneficial insects, while chives and calendula, a type of marigold, repel harmful pests.  “It is slow in the beginning. It is more work to change gears, but then it gets easier as the life in the soil grows and we build soil health,” Val says. Next, they want get certified as organic.

Ju’Coby has plans for the farm. “It’s all intertwined,” she says. White Harvest will become an education and agri-tourism site.  Classes will teach community members how to propagate and grow their own gardens. A 1938 coquina cottage built by Eartha White will be restored as an education center. A large open area next to the house is the site of an open-air farmers market, where Ju’Coby envisions community events with live music, food vendors, an outdoor cafe and cooking demonstrations. She got a first glimpse of her dream in November when White Harvest participated in the Jacksonville Tour de Farm as one of more than 50 local farms, artisan food makers and chefs. Soon the White Harvest will host celebrations weekly, generating revenue streams towards supporting the community long-term.

“Every inch will go to the community.”

FARM TO MISSION
A lot of parts make up Clara White Mission. All of them moving.

Ju’Coby, like Eartha before her, knows how to deploy a community, and is a master at marshaling resources and collaboration. She has built the non-profit organization from a $225,000 operational budget to $3.1 million, and from five employees to 29.

People who walk through the door at Clara White Mission are clients.  “Everyone is treated with dignity and respect, with an understanding that everyone has a story that has brought them to this point in their life,” says Ju’Coby.

Clara’s Canteen, White Harvest Farm and Farmer’s Market. She coordinates two annual fundraisers, Pearls and Cufflinks Gala in November and Miracle on Ashley Street in May. For Thanksgiving she hosts a city –wide event to feed homeless veterans and low-income residents for Thanksgiving.

Ju’Coby engages everyone: Jacksonville’s mayors, the city council, Chamber of Commerce, banks, corporations, churches, schools and other non-profits know her.

She is awhirl in action–arriving at the mission at 7 a.m., she peeks into the training center classroom, greets the cooks in the cafeteria, welcomes clients eating breakfast, stops to say hello at the veterans center adjoining the mission before stopping in her office on the second floor to work until she drives off to meetings and check other Clara White facilities.

Fridays are especially busy, when she attends the weekly lunch at St. John’s Cathedral, where she welcomes individuals seated throughout the banquet room before taking to the stage to thank the crowd for coming and promote the mission. If anyone is celebrating a birthday, she brings them up on the stage to sing happy birthday accompanied by the jazz band or classical violinist she has asked to volunteer to play each week. With phone in hand Ju’Coby collaborates, cajoles, plans, praises, coordinates and requests between getting into and out of the car and warmly greeting staff and friends.

Eartha White’s spirit lives on in Jacksonville, as seen in city and corporate support and the advocacy of Ju’Coby Pittman and her staff. Visit any of the mission facilities and you will hear Eartha’s mantra repeated by heart and see it posted on walls.

“Do all the good you can,

In all the ways you can,

For all the people you can,

Eartha was a pioneer.

In the 1900s, she turned her mother’s soup kitchen into a social agency. Her accomplishments include a senior citizen center, orphanage, Boys Club, programs for delinquent youth, employment training, an alcohol recovery program and housing for veterans and homeless. She was Jacksonville’s first professional social worker and female realtor, and a soprano with the first African American opera company in the United States. And that is just part of a long list of firsts. She owned and operated a variety of business, earning more than a million dollars in her lifetime, spending all of it “in the service of humankind.”

Eartha is Ju’Coby’s inspiration and motivation.  This year was her 24th with Clara White Mission, where she started working right out of college. It quickly became much more than a job.

Ju’Coby Pittman listens to Johnnie May Cox Smith during the “Feed the City” event in November. Johnnie May has been coming to the Mission for two decades.

Farm director William Byrd waters tomatoes in the high tunnel NRCS helped White Harvest Farm build. The produce from the farm is sold in the neighborhood farmers market and prepared to feed the homeless at the Clara White Mission in Jacksonville, Fla. 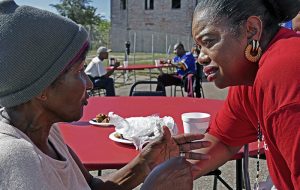 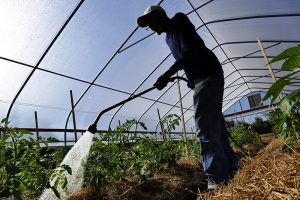 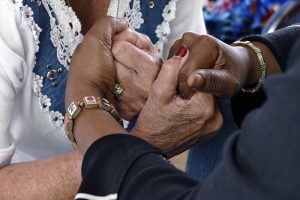