GAINESVILLE, Fla., May 11, 2017 — Supermom Angela Starling from Live Oak, Florida, has three full-time jobs: mother, farmer and director of a medical/surgical department. She takes care of kids and family, baby goats and cows, abandoned dogs, a rescue horse–and their land. 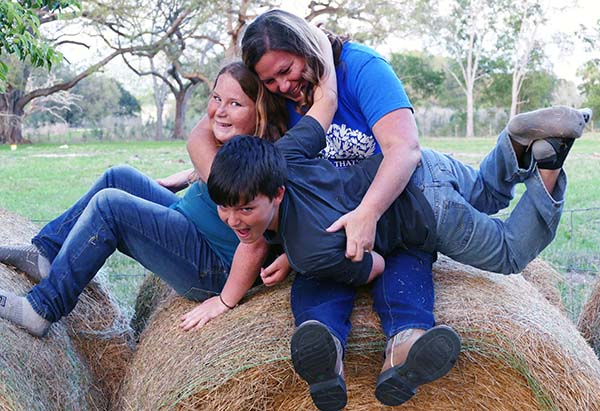 Mothers Day on the Farm

A mother’s work is never done.

Cliff and Angela were high school sweethearts. After marriage, college, having kids and moving with Cliff’s job for a decade, they returned to the country to help Cliff’s dad.  “We wanted to move away from the suburbs so the children could learn the responsibilities that come with farming. We made the decision to come home,” Angela said. That was two years ago.

The Starlings bought 40 acres and lease 30 down the road from Cliff’s parents. Cliff is a fourth generation farmer, and his dad, Claude, farms a Florida Pioneer Century Farm. Farm living, close to relatives, is what the Starlings have always wanted. “Family is the most important thing in life. You always have a team behind you,” Angela said. Now, instead of across the country, it’s only a short ride down the road on the golf cart or dirt bike for Erin, 11, and Clay, 10, to go see grandparents, uncles, aunts and cousins.

The kids have adjusted to the lifestyle change. Even the chores, although Angela said they would probably like to do less of them.  With 40 head of cattle and 35 goats, the chores don’t stop.  The children seem to like the cows, but they have really taken to the goats. Angela likes what farm life teaches them. “Kids can learn a lot about compassion for others by taking care of animals,” she said. Angela and children are active in 4-H Trailblazer Club, where Erin and Clay showed their first steers this year, winning honors from their home-grown Brangus cattle, competing against show steers. Erin’s steer won second place, Clay’s fifth, but with the highest finish of the competition. “We were so proud of them,” Angela said. As soon as they get the money from selling the steers at the market, they will purchase heifers and start their own herds. By the time they get to college, they can sell the animals to pay for it.

Cliff and Angela are full-time professionals, so they farm when they come home and on the weekends. He is an environmental specialist with Florida Department of Agriculture and Customer Services, Angie is the director of the medical/surgical department for Shands in Live Oak. “We have to work together, take turns.  It is the only way we do it all,” she said.  Everyone helps fix fences, doctor animals, bottle-feed babies, plant and harvest.  When they laid pipeline for the cow troughs this year, Erin and Clay helped carry pipe, Angela learned to glue and construct a T while Cliff ran the heavy equipment. Everyone pitches in and does what they can. “We learn a new task every day,” she said.

“First comes family, the animals and then the house,” Angela said. It, along with the farm, is a work in progress. They are renovating, dividing the living room to give Clay his own bedroom. “We make family time. We schedule it in: a day to go to the amusement park, go swimming at the springs, play games,” she said. In addition to 4-H, the family is active in church and Erin and Clay participate in a variety of school activities. Erin and Clay said Angela attends all of their events.

Their goal is to raise and sell goat and beef meat that is forage fed on their land, without pesticides or fertilizers. The soil was very poor when the Starlings first moved onto the farm. “We have been working hard to make the soil happy,” Angela said.

Cliff and Angela dug chicken litter into the soil, bought dung beetles to cycle the cow manure into the ground and planted 16 to 20 varieties of cover crops twice a year in the summer and winter. “A variety, not just plain grass; with a mix of legumes, rye and turnips, which provides better nutrients for the animals and puts nitrogen back into the ground, building soil health,” Angela said. It also prevents fertilizer and pesticides for leaching into the ground water. That is important in Suwannee County, with the highest concentration of springs in the US and the watershed drains into the Gulf of Mexico.

The fences they built allow them to rotate grazing. The cows graze first, then the goats. The animals eat different things, which prevents overgrazing and helps them resist parasites, which can be a problem for goats. The horses graze in a different area. USDA’s Natural Resources Conservation Service (NRCS) helped the Starlings develop a conservation plan and provided financial assistance to help pay for the fencing, water well, solar pump, pipes and water troughs through the Gulf of Mexico Initiative program. All of the practices the Starlings are implementing will help address water quality, soil health, animal health and plant health.

Their efforts are already paying off. The Starlings’ have transformed bare, sandy dirt into lush green pastures and the livestock maintains a good weight all year. 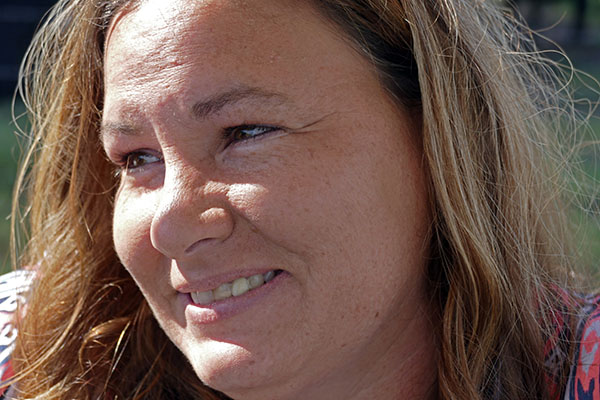 Angela plans to relax at home on her day.

Clay said he will feed all the animals and spend time watching TV with her. Erin will fix supper. What Erin values most about her mom is Angela’s kindness. The most important thing she has learned from her mom? “Things aren’t always going to turn out perfect, but be patient and do your best,” she said. Clay appreciates that Angela listens, cleans and feeds him. “And she gets me up in the morning,” he said. The most important thing she has taught him is that you have to work hard and never give up.

To learn about technical and financial assistance available from NRCS, go to Getting Started with NRCS. Begin by visiting your local NRCS field office and requesting help developing a conservation plan.